What is Tourette Syndrome?

Tourette syndrome, simply put is caused by repeated involuntary vocal as well as physical movements called TICs. In medical terms, Tourette Syndrome is a neurological disorder. It is named for Dr. Georges Gilles de la Tourette, a French neurologist who first described the condition in 1885.

Here is a quick snapshot of Tourette Syndrome:

Symptoms of Tourettes are first noticed in children when they are between 3 to 9 years of age. Tourettes has no racial or ethnic bias, however, males are affected three to four times more often than females. Tourettes is a chronic condition and its symptoms can last a lifetime. The worst time for those suffering from Tourettes is in their early teens when TIC activity reaches its height. Motor TICs include blinking, shoulder movements or shrugs, lip licking, mouth breathing, sticking the tongue out and stretching movements, and then begin improving with age.

What is TIC Disorder?

Distinct and coordinated patterns of movements. May involve a system of muscle groups

Tics fall in two categories, simple and complex. Simple tic movements are those mentioned above while complex tic are distinct, coordinated patterns of movement, usually involving several muscle groups. Sometimes, complex tics exhibit what appears to be a normal reaction like touching or smelling items. Complex tics include repetitive words and phrases whereas simple tics are just a light gabbling of noise.

Some of the most complex Tourette Syndrome symptoms include motor movements that are self-inflicting (harming self) such as punching oneself or uttering inappropriate words and phrases called coprolalia. Coprolalia is only present in approximately 10 to 15% of those diagnosed with Tourette’s Syndrome. Tics remain while the child is sleeping. Certain physical experiences, such as having to wear a tie or tight clothing, can often worsen daytime tics.

Tics or Tourette syndrome symptoms can vary in type, body location, frequency, severity and can often appear to come and go. Usually, the first symptoms are noticed in the head and neck area. They can progress to include the muscles of the body extremities. Tics involving motor skills generally appear before tics involved with speech and communication. Only 10% of those affected with tics are disabled going into adulthood. Tics tend to improve as the person moves from their teen years to adulthood.

Can Tourette Syndrome Symptoms be Suppressed?

Although the symptoms of TS are involuntary, some subjects can suppress, camouflage, or otherwise manage their tics in an effort to minimize their impact while on day to day social interactions. However, people with TS often report a substantial buildup in tension and anxiety levels while suppressing their tics to the point where they feel that the tic must be expressed (against their will). Tics in response to an environmental trigger can appear to be voluntary or purposeful but are not.

The exact cause of Tourette syndrome is still unknown, yet research till date points to abnormalities in different brain regions such and the frontal lobe, basal ganglia, and cortex. These are the areas that connect the neurotransmitters like dopamine serotonin and norepinephrine which are all responsible for communication between the cells.

Present day evidence from twin studies suggests that Tourette syndrome might be an inherited disorder. The pattern of inheritance is very complex. Genetic studies have linked some forms of Attention Deficit Hyperactivity Disorder and OCD to Tourette’s Syndrome. However, most of the other neurobiological disorders have not yet been linked.

The gender of the child also plays a very valuable role in the Tourette Syndrome gene expression. Males are 3 times more likely to have tics while females are more likely to have OCD symptoms. Therefore, genetic counseling is important for individuals who have any potential hereditary conditions.

The possibility of a range of potential co-existing disorders closely related to Tourette syndrome makes it even more difficult to diagnose. Most individuals suffering from Tourettes Syndrome also have other neurobehavioral problems that cause more debilitating impairments than the tics. Some of common the co-existing diagnosis are:

Physicians certify a confirmed diagnosis only upon verification that the child has both motor and vocal tics for at least one year. It is very common for children to receive the formal diagnosis of Tourette syndrome well into their early teen years.

There is an effective medication to treat some of the conditions that co-exist with Tourette’s Syndrome. Some medications, however, cause the tics to become more severe. Behavioral treatment and training can also help to reduce the wrongful diagnosis of Tourette Syndrome and help to unearth other co-existing disorders. Supportive therapy may help a child with Tourette Syndrome to better cope with the disorder and deal with the secondary or co-existing social and emotional problems.

Although there is no cure for TS, the condition seems to improve between the ages of 16-20. As a result, some may actually become symptom-free or no longer need medication for tic suppression. Although the disorder is generally lifelong and chronic, it is not a degenerative condition. Individuals with TS have a normal life expectancy. Also, Tourette syndrome does not impair intelligence.

Note: Though tic symptoms tend to decrease with age, it is possible that co-existing neurobehavioral disorders such as ADHD, OCD, generalized anxiety, depression, mood swings and panic attacks can still cause impairment in adult life.

There are treatments to help manage the tics caused by Tourettes Syndrome to assist patients to carry out normal activities. Help is available in the form of Medications and behavioral therapy to limit the interference of tics (causing pain or anxiety) in daily life. Often, the people around someone with Tourette Syndrome do not realize that tics are something that the person cannot control and they are not being disruptive on purpose. Informing people about tics associated with Tourette’s syndrome often helps the person feel less anxious and the tics tend to lessen.

Since it is very common for someone with Tourettes Syndrome to have co-existing conditions such as Attention Deficit Disorder and ADHD, personalized treatment plans must be developed based on individual symptoms. Here is a list of what is commonly prescribed as a treatment for those with Tourette Syndrome:

MUST READ: A Parent’s Guide for Autism Medication

Medications are generally prescribed to lessen the tics which, if severe enough, interfere with everyday life. Medications do not eliminate the tics; they only lessen its severity. If there are co-existing conditions such as ADHD, ADD or OCD, separate medications may be prescribed to help control these ancillary conditions as well. 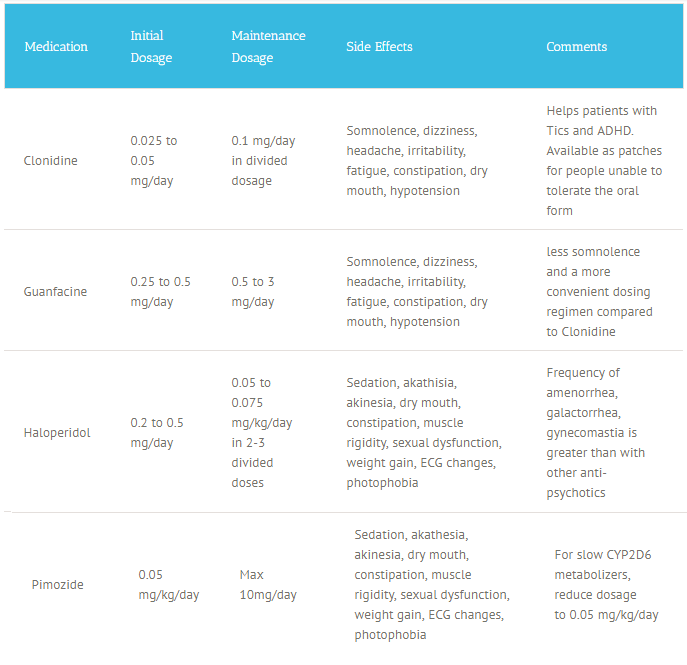 Table 1: Medications for Tourette Syndrome treatment. Indicative only – Please consult a physician before use

There is no universal drug prescribed specifically for Tourettes treatment. Just as every person is an individual, the types and dosage of medication used is tailored based on the patient’s medical history and behavior. Medications are often introduced slowly by your physician to ensure its dosage is correct and that there are no adverse side effects. Only your doctor can decide if medication and its side effects outweigh the benefits for treatment of Tourette syndrome.

Habit reversal therapy is the most used behavioral therapy to treat Tourette syndrome. There are two parts to habit reversal – awareness training and competing response training. In the course of habit reversal the person says what tic is currently happening, such as raising their arm. When the tic occurs, the patient verbally states what is happening and his/her therapist will give him a counter response to perform at the time the tic is occurring.

The person will be given a replacement for the tic such as sitting on your hands while in class, thus preventing the tic of raising your hand. If it is only one hand that is affected, then that is the hand that you would sit on or place under a stack of books. Another replacement might be sitting in class with your arms crossed over your body, thus preventing your hand, arm or shoulder from rising. This habit reversal takes time and gets better with practice and perseverance.

You would need to work with a licensed occupational therapist who can encourage and suggest alternate movements for tics that are generally disruptive. Please keep in mind that tics are not controlled by the person, it is controlled in the brain – working with a therapist will give options to control, reverse or inhibit the tic reaction however it is never gone or cured.

Comprehensive Behavioral Intervention or CBIT is a fairly new and effective behavioral therapy. Again this should be done with a licensed therapist who is trained in CBIT. This form of behavioral therapy encompasses habit reversal, behavior therapy, relaxation methods and parenTourette’suctions.

Often, tics occur when the person is in a new environment or in the classroom when new material is being discussed. It is important that the parent learns the signs of an impending tic action and know how to implement reversal behavior. Parents should schedule frequent meetings with the child’s teacher so that everyone can work together to lessen the impact of tics.

Presently the National Institute of Neurological Science and Stroke (NINDS), is responsible for supporting and conducting research in the area of Tourette’s syndrome and other Communication Disorders. They also provide funds for professionals to be trained in Tourette’s syndrome research and there ably. Learning and research about Tourette Syndrome treatment comes from studies across a varied number of medical and scientific disciplines. Some of these disciplines include genetics, neuroimaging, neuropathology, clinical trials, epidemiology, neurophysiology, neuro-immunology, and descriptive/diagnostic clinical science.