A senior researcher in Artificial Intelligence and Computer Science at MIT has presented a new study where etiology of Autism has been linked to the herbicide Roundup.

Dr. Stephanie Seneff, who has been for some time now focusing her studies on nutrition and health has recently discoursed her findings in a panel discussion held in Groton, Massachusetts. Her research has zeroed on the Monsanto herbicide, popularly called the Roundup, as a key factor that may have contributed to the increase in Autism prevalence in recent years. 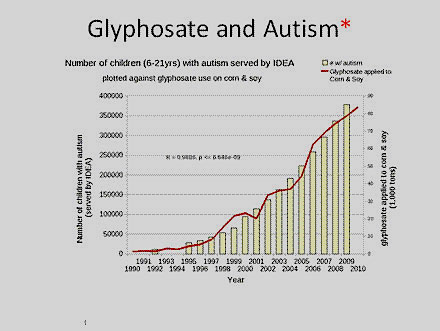 The herbicide Roundup has been in use for a while now in US. People started using it at early as the 1970s and has since been rather popular as a weedkiller.  The weedkiller itself promises all that a weedkiller should — that it eliminates weeds from the roots, prevents reappearance and protects the garden.

The Roundup is a product by the Fortune 500 agricultural company Monsanto that has a vision to create an ‘environmentally responsible weed control program‘ to aid agriculture. The active ingredient in Roundup is glyphosate and over the years, from being just a weedkiller it has graduated to treat crops.

The product itself has been in use in 130 countries and has been approved for use on most crops. It is now extensively used  and the need to use glyphosate to keep up with the high levels of agricultural demand has been growing steadily over the years.

As per statistics, the use of glyphosate just in the year 2007 was equivalent to 185 million pounds.

Basic food items, such as wheat, corn, soy, maize, canola etc, are regularly treated with the product and now these food items are genetically modified to resist the negative effects of the herbicide. This ‘Roundup Ready’ crops has been a boon for the farmers. It has made utilization of farmlands better, along with an increase in production. In 2012, the Monsanto was the largest supplier of vegetable seeds in the world. Undoubtedly, Monsanto has shown a great positive effect on modern agriculture.

Dr. Seneff, however, has blamed this glyphosate for the recent rise in autism and other neurological disorders. According to her study, consumption of glyphosate results in engaging the bacteria found in the digestive tracks in a process called ‘shikimate pathway’.

The shikimate acid pathway is a metabolic route, consisting of seven steps that enables the movement of bacteria, algae and fungi for the biosynthesis of amino acids. The interference of glyphosate with the bacteria causes a deterioration of amino acids.It should, at this point, be noted that humans and animals do not have the shikimate pathway, and therefore, safe from the effects of the glyphosate chemical.

Dr. Seneff, however, believes that even though animals and humans are not directly affected by glyphosate, the digestive tract bacteria can be, and it is via these bacteria that the chemical manages to enter human system and play havoc with the essential amino acids. It increases the damage that can be caused by chemical residues and toxins found in food.

Stephanie claims that the presence of glyphosate not only disrupts the gut bacteria but also stops the production of Cytochromes P450 or the CYP enzymes needed for metabolic activities. She argues that the effects of the inhibited CYP 450 has not been properly studied in humans.

The herbicide Roundup has gone through several tests and trials and each time it has been found to pose absolutely no health risk to humans, in terms of toxicity (unless there is a case of deliberate overdose) or other long-lasting effects.

Most scientists are siding with Monsanto, given that Dr. Seneff has blamed all the health risk issues we face on the herbicide. Not only autism, Dr. Seneff has found the disruption caused by Roundup as a trigger for Alzheimer’s, obesity, depression, cancer, infertility, diabetes, heart disease and other disorders linked to a western diet pattern.

Tamar Haspel from Huffington Post Green has called the research ‘bad science‘ and most others seem to voice similar opinions. Her research has been about blaming a single popular product. It is true that autism has been on the rise and people are frantically looking for causes and cures. However, it may not be that simple and neurological disorders may have more to do with genetics and stem cells than a weedkiller.