Rett syndrome is a neurodevelopmental disorder that almost exclusively affects girls. Children with Rett’s syndrome, in the initial stages, tend to show symptoms that are very much similar to early signs of autism. Much like autism, your child shows normal growth and development followed by a gradual (or sudden) regression of their developmental skills.

Most children diagnosed with Rett Syndrome will have slower head and brain growth which is often an early indication of the disorder. Seizures are quite common as well. 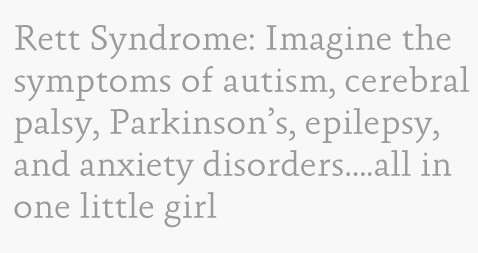 Rett’s Syndrome is perhaps the rarest among the major types of Autism and perhaps the only one that could be confirmed through medical tests. The support level required for girls with Rett’s syndrome ranges from Level 2 to Level 3. Jump to the end of the post for the various support levels across the Autism Spectrum Disorder.

Rett’s Syndrome has no racial or ethnic relationship. It is estimated that only one in every 10,000 female births will produce a female with Rett’s syndrome.

Unlike autism (which may only have a genetic predisposition, refer to the article on Is Autism Genetic), Rett’s syndrome is considered a genetic disorder though it is surprising that in most cases, it occurs in families without any prior history of autism. Rett’s is caused when a mutation randomly occurs in a gene. Only one percent of the recorded cases are said to be inherited which means that the rest of the cases are caused due to spontaneous and random mutations.

Rett Syndrome is caused by the mutation of MECP2 gene. This allows for genetic testing prior to birth, thereby reducing the risk of a family having more than one child with Rett’s Syndrome to less than one percent (except for twins).

Rett’s Syndrome – Why Only Girls?

It is important to note that MECP2 gene is a component of the X chromosome. Since girls possess two X chromosomes, this results in higher risk for Rett’s syndrome. Due to the result of this mutation, out of the two X chromosomes that girls have, only one remains active in each cell. This means that girls with Rett’s syndrome only use a portion are missing the functionality of the other X chromosome, hence the impairment. But still, since the other X is fully functional, the core metabolic and neuro-functional requirements are still met and the girl survives.

But the situation is different when it comes to boys. Boys only have one X chromosome, and therefore lack a backup that could compensate for a defective one. Since they lack any form of protection from MECP2 mutations and often die shortly after birth. The small and infrequent numbers of boys that do manage to make it usually suffer a far greater degree of intellectual ability.

The Stages of Rett Syndrome

There are four (4) key stages of Rett Syndrome. Prior to the onset of symptoms, your child tends to grow and develop normally. Gradually mental and physical symptoms start to appear. Early symptoms may include sensory issues like problems with crawling, walking and eye contact, all of which were initially present, but are now regressing (read at what age is autism usually diagnosed). There is also a loss in use of the hands followed by compulsive hand movements.

This stage usually occurs between 6 to 18 months which is exhibited by the lack of performance of normal motor functions including eye contact and speech. You may notice walking on the toes, slowed growth, sleep and breathing problems. This stage usually goes somewhat unnoticed as each child develops differently. Stage One usually last for a few months to a year.

This stage generally occurs between the ages of 1 to 4 and may last for weeks to months. The onset is usually rapid as your daughter may drastically loose their hand skills and speech. There are characteristic hand movements that may appear including (but not restricted to) hand-wringing, clapping, tapping or repetitive movement of the hands. These movements usually occur while your child is awake.

However, during sleep, breathing problems such as sleep apnea, hyperventilation may be observed. At this point, some girls may show more symptoms of autism such as unsteady walking and dysfunctional motor skills. You or your physician may notice unusually slow head growth.

This stage is seen between the ages of 2 to 10 and lasts for years. During this stage, motor skill problems and seizures are frequent and prominent. There may be an improvement in behavior during this stage with less autistic symptoms. Your child may begin to show interest in themselves and their surroundings. Many girls remain at this stage for most of their lives as their attention span and communication skills have improved over time.

The last of the 4 stages can last for years or decades. You will notice reduced mobility, a curvature of the spine, muscle weakness, abnormal posturing of an arm or leg. Those who were walking before may stop walking altogether. Cognition, communication, hand motor skills usually do not deteriorate. Eye contact usually improves as well while the repetitive hand movement’s decrease.

Like many other neurological problems, there is no cure for Rett Syndrome. Treatment is generally tactical and based on the symptoms that appear. Most of the time, the focus is on managing the symptoms, especially the sleep apnea symptoms. There is medication to assist with breathing and seizures.

It is important for parents and caregivers to monitor for scoliosis and possible heart problems. You should have regular visits with your physician to allow for early diagnosis of any of these problems. Occupational therapy for autism and the use of leg or hand braces can be of value in helping your child be more independent. Much like autism, assistance with academics, speech, and social interaction is always advised.

Here is what Dr. Ronin Steward had to say about Rett’s:

“Rett Syndrome is RARE, but for parents of a child with Rett Syndrome, there is hope! Despite the difficulties with symptoms, many individuals with Rett syndrome continue to live well into middle age and beyond. Because the disorder is rare, very little is known about long-term prognosis and life expectancy. While there are women in their 40s and 50s with the disorder, currently it is not possible to make reliable estimates about life expectancy beyond age 40.”

Children on the autism spectrum have occupational, behavioral, speech and various other therapies available to them. These same therapies are available to children with Rett Syndrome. Physical therapists, who can provide braces for steadier mobility and function, work daily with children with Rett syndrome. Water therapy is highly recommended for girls with Rett Syndrome as it keeps the muscles free and mobile in a controlled manner.

There are primarily 3 Levels of Support for people with ASD. Click on the Support Levels in the table below to know what they mean. Also, you can click on the Autism Types at the header to acquire an understanding of what each type of autism means.