A recent study on development trajectory of Autistic Symptom Severity and Adaptive Functioning, conducted by Canadian researchers and published in JAMA Psychiatry online showed that in many cases it is possible for autistic children to improve by the time they reach school going age.

The research conducted under the guidance of renowned Autism and Asperger’s Syndrome researcher, Dr Peter Satzmari, followed the development graph of 421 children affected by Autism Spectrum Disorder over a period of few years.

The study involved extensive data collection on information about pre-school children affected by ASD (355 boys and 66 girls), from aged 2-4, when their disorder was diagnosed up till the time they reached age 6, by when most children are ready for school.

The researchers marked four different positions in the lives of these children to evaluate their Symptom Severity (Hand flapping, Finger flicking, staring at lights, repeat speech or echolalia, etc.) and Adaptive Functioning (ability to adapt to day to day activities). 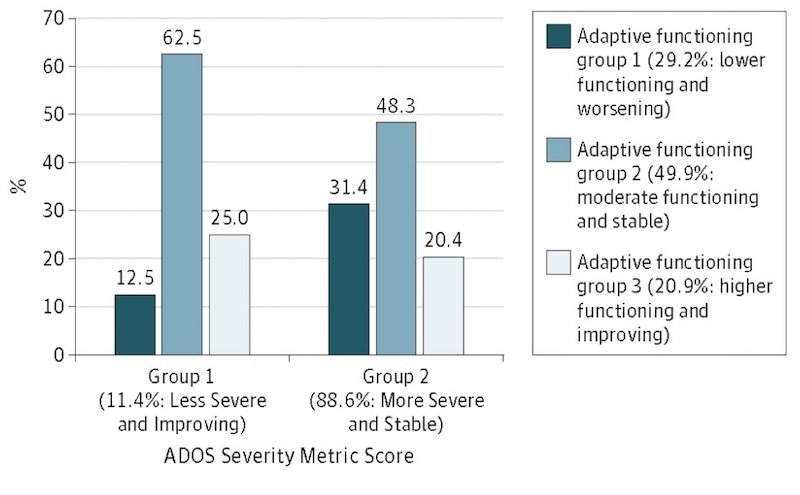 Fig 3: Adaptive Functioning and Autistic Symptom Severity: Cross-Trajectory Group Membership (© JAMA Psychiatry). Download ChartAmong these 421 children, only 66 were girls with autism and the researchers found their symptoms to be less severe along with the fact that they showed more improvement in their symptoms as well. It has been observed that Autism generally affects more boys than girls, according to U.S. Centers for Disease Control and Prevention.

According to Dr. Szatmari, one needs to address both these aspects of autistic children – their Adaptive Functioning and Symptom Severity to achieve an overall development. The relationship between these two domains is yet to be accurately determined.

He pointed out that improvement in adaptability and daily functioning should take a bigger priority than lessening the symptoms of the disorder. The betterment of their daily adaptability will make their life easier in the long run, where social integration will play a much bigger role. For now, very little connection has been found between these two domains of ASD in pre-schoolers.

It has been observed that, in many cases, parents bring their children for assessment when they are almost 3-4 years old, even though the symptoms might have been present from as early as age 2, thus losing valued time necessary for early intervention and autism treatment.

It is generally agreed among pediatricians and therapy coaches that children affected by ASD responds and develops best when their condition is addressed as early as possible.

Autism and its symptoms vary by and large among individuals. Change in one aspect does not signify a change in the other. For the best outcome, a flexible method addressed towards both Symptom Severity and Adaptive Functioning should be administered.

For details on the study click here to refer to JAMA Psychiatry.